There is Coliform in my Well- What to Do? 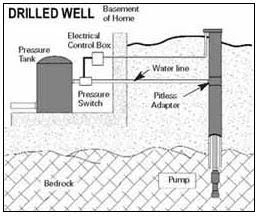 Many instances of total coliform contamination are introduced in the water system and do not originate in the water supply. Washington State is currently investigation the percentage of problems are a result of ground water contamination.

Bacteria washed into the ground by rainfall or snowmelt are usually filtered out as water seeps through the soil, so properly constructed water wells do not typically harbor Coliform bacteria. However, coliform bacteria can persist within slime formed by naturally occurring ground water microorganisms. The slime (or biofilm) clings to the well screen, casing, drop pipe, and pump and may even invade filter systems. Disturbances during pumping or well maintenance can cause the slime to dislodge, releasing the coliform bacteria.

Keep in mind that coliform bacteria do not always show up in every sample. They can be sporadic and sometimes seasonal when they occur in a water supply. Be concerned but do not panic if coliform bacteria are detected. Before treating, repairing, or replacing the well, it is wise to resample immediately if a positive sample is collected making sure to use proper testing procedures. If you receive a second positive sample for total coli forms, or if the initial sample is positive for fecal coliform, do not consume the water. Bring the water to a rolling boil for one to five minutes (the higher the elevation the more time is necessary) to kill the bacteria. You may also want to consider using bottled water as a temporary drinking and cooking water source.

Bacteria can be introduced into a new well during construction and can remain if the water system is not thoroughly disinfected and flushed. Well construction defects such as insufficient well casing depth, improper sealing of the space between the well casing and the borehole, corroded or cracked well casings, and poor well seals or caps can allow sewage, surface water, or insects to carry coliform bacteria into the well. These problems are common and the most likely source of the coliform bacteria contamination. Unplugged abandoned wells can also carry coliform bacteria into deeper aquifers. In an existing well system that formerly was bacteria free look for defects. These include: openings at the top of the well; old, rusty, or damaged well casing; unprotected suction line; buried wellhead; and, close proximity of a well to septic tanks, drain fields, sewers, kitchen sinks, drains, privies, barnyards, animal feedlots, abandoned wells, and surface water.

After a confirmed positive total coliform test, check following things to look for as a source of contamination introduction. Any defects in the system should be repaired, the system treated with chlorine and then retested after 10 days to two weeks. Items to look for are:
Since bacterial contamination cannot be detected by taste, smell, or sight, all drinking water wells should be tested at least annually for Coliform bacteria. Most state’s well construction code requires all new, repaired, or reconditioned wells to be disinfected with chlorine to kill bacteria that may have been introduced during construction. Testing is required initially to demonstrate that the water is free of Coliform bacteria before the well is put into service. A Coliform bacteria test is also recommended immediately if:
Before implementing one of the solutions listed below, be sure to inspect the well for defects, check the grouting, casing, and clean the water delivery system and filter of slime and flush the system fully. Then retest. If the system passes let a few weeks go by and retest again. If repairing and cleaning the system does not solve the problem then one of the long-term solutions will have to be implemented.

Long-Term Options for Dealing with Bacterial Contamination of a Well

Elizabeth Ward,
Elizabeth was awarded an MBA from the University of Pittsburgh and an MS ChE from NYU Tandon School of Engineering, worked as a chemical engineer for both the US EPA in DC, and at DuPont before working in finance and then becoming consultant with Washington Advisors and is the author of "The Lenders Guide to Developing an Environmental Risk Management Program." Elizabeth retired from Washington Advisors and began her volunteer career and served 10 years as the Treasurer of the Prince William Soil and Water Conservation District.

Green Risks provides information to understand the natural world especially in our local region. The blog is a mix of technical guidance and interesting information with a slant towards information to live a greener and more sustainable life. You will find articles on a wide range of water and environmental topics including help with water well problems and maintenance, septic systems and regulations, solar energy, low impact development, and many others all with the intent of teaching practical ways to solve problems and revive common sense in our society.