Black Spots on My House 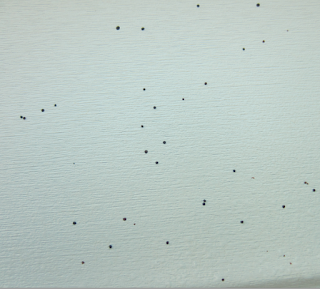 If you have hundreds of little back spots on your home, porch, railing, retaining walls that look like overspray from coating your driveway or black paint, the real culprit is a white rot fungus in the mulch around the foundation of the house. The artillery fungus is very small about 1/10 of an inch across and are very hard to see in the mulch; however, the spores are very visible.

The artillery or shotgun fungus, genus Sphaerobolus, is responsible for causing the tar like spots on light colored or reflective objects located in the immediate area. The artillery fungus is very common in the northeast, as well as many other parts of thecountry. The spore masses from the fungus are literally shot towards any reflective or bright surface or towards the light itself, so it tends to appear on windows, white siding, white cars and the stone retaining walls. The fungus appears most often on the northern side of the home. In my case the fungus covers the northeastern face of the house, leaving three sides untouched.

Artillery fungus is a wood-decay fungus that likes to live on moist landscape mulch and is most prevalent in the bagged bark and wood chip mixed type of mulch. The fungus tends shoot itspores during the cool, wet days of the spring and fall because sporulationdoes not occur above 77 degrees Fahrenheit. Artillery fungus (Sphaerobolus) spore masses may already be present at a site on old mulch, previously infested plant leaves, rabbit or deer droppings, decaying leaves, and grass and may reemerge each season. So until you eliminate the problem the fungus may reemerge every spring and fall. The artillery fungus grows better and produces more spores during wet years. The black spots (spores) are dormant, and pose no threat to the siding other than staining it, but sanding, scraping, or otherwise removing the spores, will allow them fall onto the ground and  infest any new foundation mulch. So if you are going to remove the spores from windows with a razor or other method, do it before you replace the mulch.

Control of this fungus can be very difficult. Even if I was willing to use chemicals, there are no fungicides for use against this fungus. Control consists mainly of removing infected mulch and plants. Infected mulch should be removed and new mulch put down in its place. Alternatively a new layer of mulch may be placed on top of the old to act as a barrier, but must be continually replaced. A study at Pennsylvania State University (home of the Nittney Lions) found that artillery fungus is least likely to occur in white pine bark and most likely to occur in wood chip and bark mixed mulch. I’m fairly sure that I introduced the fungus into my beds by buying mixed wood and bark mulch from the high school fundraiser for several years. Now I am trying to extinguish or control the fungus. According to the researchers artillery fungus seems to prefer wood as opposed to bark. Much of the mulch that we use today is recycled wood.  In addition, today’s mulches are finely-shredded to hold more moisture than the older coarsely ground mulches

Since the fungus commonly occurs on dead trees, dead branches, rotting wood, etc., I am thinking of replacing my mulch with peat moss, but it is reportedly not sustainable because the peatbogs are fragile ecosystems. The researchers at Pennsylvania State University did not test peat moss; it is not a tree based product. Finely ground stones or nut shells might be another option. Recycled rubber mulches, are not a good solution to this problem. Research at Bucknell University indicates that rubber leachate from recycled car tires can kill entire aquatic communities of algae, zooplankton, snails, and fish. At lower concentrations, the leachates cause reproductive problems and precancerous lesions. Rubber mulches are flammable. Although some of the additives used in tire manufacture are toxic to rubber-degrading bacteria, the white-rot fungal species of which artillery fungus is a member can detoxify these additives allowing the breakdown of the rubber and the potential of leaching of toxic additives into the soil and the groundwater.

So, is there anything you can do about the damage to your home? It was almost a year before I noticed the spores on the northeast portion of my home and the number of spores have continued to increase despite my best efforts. Several attempts at removing the spores with various solutions failed. However, as can be seen in the pictures above I’ve had some limited success. The windows can be cleaned using a razor or putty knife, but I used the Mr. Clean Magic Eraser to remove the spores from around my entry and an on the windows. It was less successful on the textured surface of the vinyl siding leaving the ghost spots that are still visible. The picture below is of two sections of siding, I used the Eraser on the upper piece and the lower portion I left alone. It is not great, but a vast improvement. 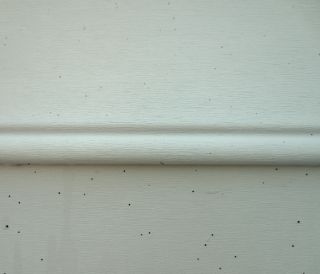 Magic Erasers, Easy Erasing Pads and similar products all have the same key ingredient: melamine foam. Melamine foam erasers work well; but on surfaces that are painted, polished or easily scratched, they might damage the surface. (Do not use them on the body of a car!) My painted window frames and trim and front entry were fine, but yours might not be. It's recommended by the manufacture that you test the eraser on a small, preferably unnoticeable, portion of whatever you're looking to clean before you the sponge extensively on any surface. Melamine foam erasers wear out quickly and to remove the spores from my siding would essentially take hand rubbing of the entire side of the house and a carton (or ten) of the Magic Erasers. All this would have to be done before I put new bark mulch down on my beds. Not this year.
Posted by Elizabeth Ward, at 3:03 AM

Elizabeth Ward,
Elizabeth was awarded an MBA from the University of Pittsburgh and an MS ChE from NYU Tandon School of Engineering, worked as a chemical engineer for both the US EPA in DC, and at DuPont before working in finance and then becoming consultant with Washington Advisors and is the author of "The Lenders Guide to Developing an Environmental Risk Management Program." Elizabeth retired from Washington Advisors and began her volunteer career and served 10 years as the Treasurer of the Prince William Soil and Water Conservation District.

Green Risks provides information to understand the natural world especially in our local region. The blog is a mix of technical guidance and interesting information with a slant towards information to live a greener and more sustainable life. You will find articles on a wide range of water and environmental topics including help with water well problems and maintenance, septic systems and regulations, solar energy, low impact development, and many others all with the intent of teaching practical ways to solve problems and revive common sense in our society.